The Monadnock Building: A History with Masonry

When it comes to historic buildings that provide a sense of place, Chicago’s Monadnock Building certainly fits that bill. With a life span from 1893 to the present, the Monadnock Building is an enduring example of both the load-bearing masonry construction style and the “Chicago-School” style of architecture.

Architecture firm Burnham & Root designed the north section of the building and construction was completed in 1893 at 53 West Jackson Blvd. in Chicago’s South Loop business district. The southern addition on Van Buren Street was designed two years later by architecture firm Holabird & Roche. While the later addition is similar to the original, the design is more traditionally ornate. When completed, it was the largest office building in the world. It was also significant for its inclusion of decorative staircases, which represent the first structural use of aluminum in building construction.

The original building’s 16 stories are supported by a massive base of granite at street-level, which supports the building’s full weight; steel-frame construction that came later eliminated the need for this stone hulk of a foundation. Monadnock is the tallest load-bearing brick skyscraper ever built in this manner, which must have made it quite the oddity and phenomenon at the time of its construction. 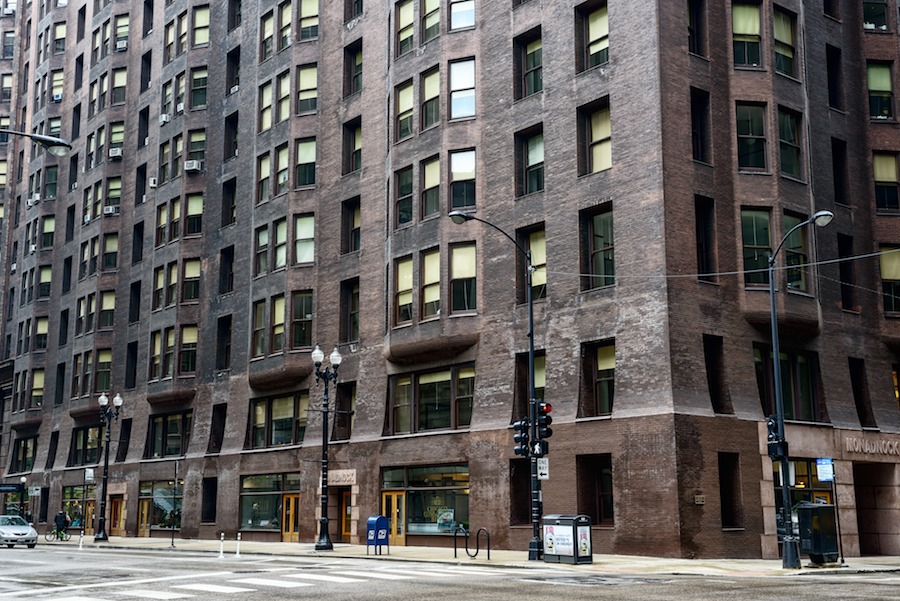 However, not everyone appreciated it. The original north half of the building has been described as a “stubborn,” “unornamented vertical mass” of brick, save for the slight Egyptian flare at the very top. It didn’t help that the building was used for commercial purposes, which gave it a utilitarian feel, rather than a building built for visual pleasure. The south half is slightly more ornamental, with brickwork at the base and a large copper cornice at the roof and bay windows to let in light, breaking up its massive profile. Its name is certainly both an homage and an apt descriptor of the building’s appearance – the word “monadnock” is a term used by American geographers to describe a “rocky mass.” The name was inspired by Mount Monadnock, the most prominent mountain peak in southern New Hampshire, which itself got its name from the Native Americans of the area. They called it “smooth mountain” or “isolated mountain,” meaning that it is a mountain that rises alone from a relatively flat area.

The Monadnock Building was one of the first to be named a Chicago Architectural Landmark in 1958. It was added to the National Register of Historic Places in 1970, and named as part of the Printing House Row Historic District in 1976. Many buildings in Chicago were prone to sinking into the area’’s clay soils — the Monadnock has the Chicago River on the north and west side and Lake Michigan on the east side. Architectural draftsman John Wellborn Root developed the floating raft system of interlaced steel beams, to create a foundation for tall buildings that would not sink.

The Monadnock is actually four buildings in a flush row with connecting corridors. All four—the Monadnock, Kearsarge, Katahdin, and Wachusett—were named after New England mountains. Boston real estate developers Peter and Shepherd Brooks commissioned the Monadnock during the building boom following the Depression of 1873–79. The Brooks family consolidated their wealth gained from the shipping insurance business and were gainfully investing in Chicago real estate at the time. Architectural draftsmen Daniel Burnham and John Wellborn Root met early in their careers, and joined forces in forming their own company in 1873, becoming one of Chicago’s most famous architectural companies of the nineteenth century.

The Monadnock Building represents the near-culmination of their skill and style. Their 18-year partnership came to a tragic end in 1891 when Root contracted pneumonia. He had only just turned 41 years old, and he and Burnham were in the early stages of coordinating the construction for the Columbian Exposition World’s Fair, celebrating the 400th anniversary of the “discovery” of the United States – what would have been their largest and most significant project by far.

Although no one realized it at the time, the Monadnock would become one of the prime examples of a style of architecture that came to be known as “Chicago Style.” The unfinished granite block at the base gives way to a stripped-down facade, rising away from the hubbub of the street and revealing a grace and efficiency of commercial usage where ornamentation was neither necessary nor wanted. Its sheer mass alone was enough to define the building’s importance. Unfortunately, just two years later, the second design firm, Holabird & Roche, clearly didn’t feel as confident.

Great as the original north building was, it had cost too much to build, and Holabird & Roche’s design for the second half of the building was far more cost-effective. The transition from load-bearing masonry to steel-frame construction started here. The Katahdin building used the same iron-framed masonry construction as the original, while the Wachusett was entirely steel framed. The south addition of the Monadnock required only a thin facing of terra cotta over its steel frame, which allowed for more glass and faster, less expensive construction (15% less).

Remodeling of the Monadnock in 1938 represented one of the first major skyscraper renovations ever undertaken. Maintenance in the building was reportedly difficult, and the city, at the time, was keen to demolish aging buildings. The “progressive styling” of the building, as it was called, restyled the main entrance, remodeled the lobby and ground floor shops, modernized all public spaces, and progressively modernized office suites to counteract declining tenancy. It clearly worked, because the building was spared.

In 1966 the building was sold for $2 million to owners of a handful of other notable Chicago buildings. Interiors were again modernized, with added carpet, fluorescent lights, and new doors. Despite Root’s valiant efforts with his novel foundation, the north wall had sunk 1.75 inches in 1974, leading to the wall being shored up. Again, tenancy declined in the late 1970s, and the owners again sold the building. It sold again in 1979 for $2 million dollars, to owners who restored the building to its original condition in one of the most comprehensive skyscraper restorations ever attempted.

Interestingly, the Holabird & Roche firm continues as Chicago’s oldest architecture firm, now known as Holabird & Root. Holabird died in 1923, and Roche in 1927, but Holabird’s son and John Wellborn Root, Jr., who had both joined back in 1914, continued to lead the firm, although no one of either name is currently involved today.

The new 1979 owner of the Monadnock, William Donnell, purchased a building in a sad state. One entrance had been closed, painted brick was peeling, marble wainscoting had been painted over, many of the original oak doors had been replaced, and some stairways and corridors had been closed off completely. Sadly, the original mosaic tile had been demolished or carpeted over. Only half of the elevators worked.

Donnell couldn’t fund his endeavor to gut and completely restore the building as planned. Rather, he instead chose to painstakingly restore the Monadnock to its original condition. Working from original drawings and old photographs, Donnell and preservation architects worked room by room, restoring each office as it became vacant to its condition when first constructed before any modernization had been performed. Incredibly, the team hired Italian craftsmen to recreate the mosaic floors at a cost of $50 per square foot. The original feather-chipped glass was recreated, to line corridors and create partitions that allow natural light to flow through the narrow building.

Perfect replicas of other hardware, like light fixtures and bulbs, were fabricated using old photographs as guides. Marble was purchased from the same Italian quarry that supplied Root’s original construction to restore the lobby walls and ceilings. Fluorescent lighting was prohibited, and signage was strictly nothing more than gold leaf lettering on the glass. Donnell even sought tenants for the street-level shops that were similar to their 19th-century counterpart- for instance, a barbershop and a florist with vintage decor.

All told, the ambitious restoration work cost $1 million per floor or $47 per square foot. Donnell’s goal, as he told Chicago Magazine in 1991, was that the Monadnock would not only look as it originally did, but it would also live as it used to. His efforts paid off with higher rents and increased tenancy. In 1987, the Monadnock was selected as one of the top restoration projects in the country by the National Trust for Historic Preservation, thanks to its faithfulness to its original condition.

The building was sold again in 2008. According to the building’s website, its office suites are marketed as “ideal for independent professional firms and entrepreneurs,” ranging in size from 250 to 5,000 square feet, which means businesses can stay in the Monadnock as they grow from startup to corporation. The building embraces Chicago’s business community with fiber optic internet, conference rooms, business services like shipping and mailing, and also offers cafes, shoe and hat shops, a florist and jeweler, a barbershop, and a dry cleaner. Office rent far surpasses anything that the original Brooks family owners would have even dreamed of: the smallest office currently available office is 354 square feet and rents for $941 a month.

Visitors can tour the Monadnock, billed by Architecture.org as “the world’s tallest commercial building with load-bearing masonry walls,” where they can “learn about the transition from masonry to steel-frame skyscrapers.” The tour takes three-quarters of an hour and costs $20, a small cost to see the meticulous restoration of this beauty of a building, the Egyptian inspiration, the “mountain” that rises from nothing, and the best of the Chicago School style.

As anyone reading this magazine knows, masonry is one of the most durable parts of any building or structure. However, the masonry’s longevity does depend on the type and quality of material used and the workmanship. Since this building has lasted 126 years and counting, the quality of materials and workmanship must have been very high indeed.