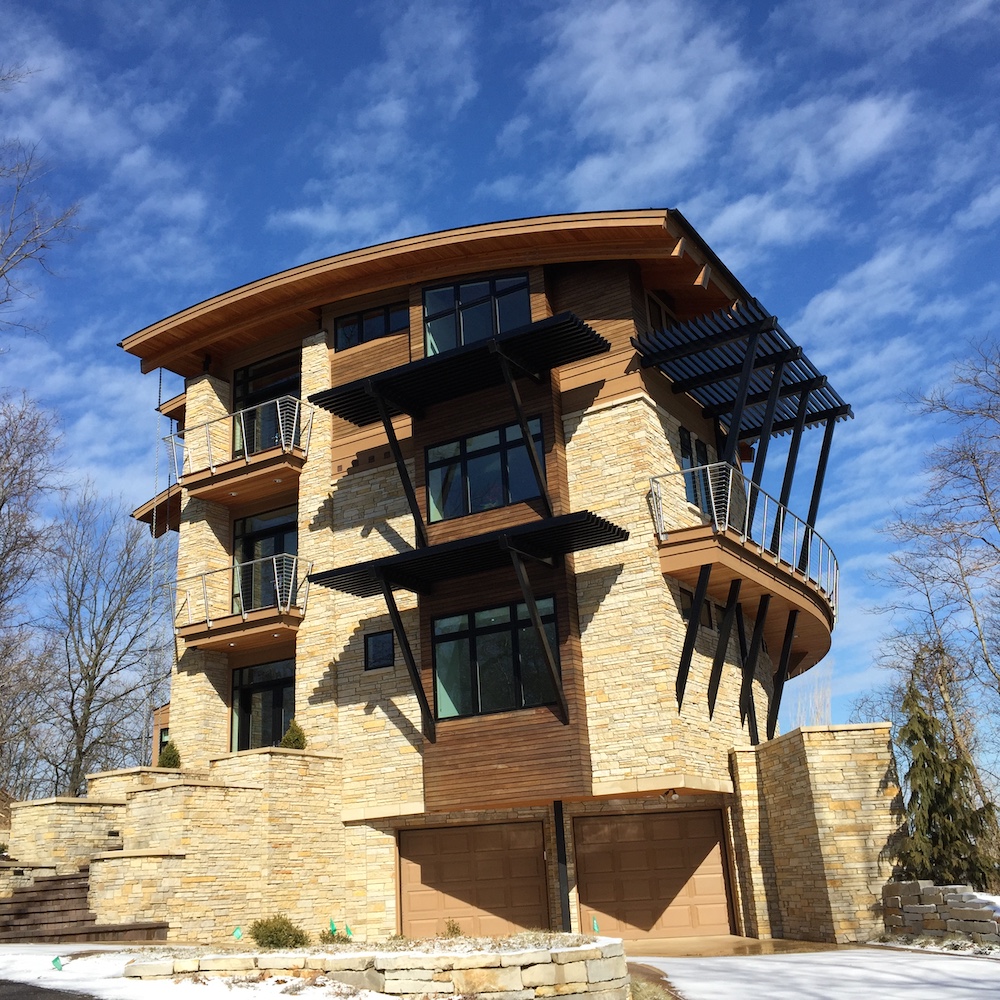 In northern Michigan, just 40 miles south of the tip of the mitten, lies Forest Beach. The area boasts large dunes and spectacular views of Little Traverse Bay and Lake Michigan. On this stretch of beach sits a relatively new addition to the community — a towering three-story mansion with wrap-around decks and tall windows.

This home didn’t just appear overnight, however. Ten long years of designing, building, and planning made this property what it is today.

Planning first began in 2007, when a client consulted with John Allegretti, FAIA LEED AP BD+C, on building a second home in the area. Nearly three decades ago, Allegretti had helped to design and build a house on North Beach, so he knew about the site. However, this more recent build presented a new host of challenges to Allegretti and his team.

First, they had to find a way to incorporate design features including a lap pool, a variety of sundries, outdoor decks, and terraces. Much of the property contained dunes with more than a 33 1/3 degree slope. Michigan’s Department of Environmental Quality deems these dunes critical, meaning they cannot support construction. Thus, the team had to design a building that would fit the needs of both the owner and the state. This was no easy task.

Then, in 2008, the economic crisis hit, and work came to a halt. The owner kept the property for a few years but, once designing and planning resumed in 2010, put the land back on the market. Four years later, new owners from Chicago decided they wanted to build a house there. The design they had in mind was much like the one Allegretti had already drawn up.

Over the next three years, multiple designers, contractors, and builders collaborated and constructed the three-story home. They dedicated six months of those years to planning, while the other two and a half involved physical construction. Throughout the process, the teams adapted to two winters and the blowing sands, which constantly shaped and reshaped the dunes and their building strategy.

The new owners adopted and adapted the conceptual design Allegretti had already drawn up. They also brought in their own contractors, Glass and Associates of Kalamazoo, Michigan, with whom they had worked in the past. Contractor Charlie Glass and project manager Adam Harvey worked closely with the owners to make decisions regarding cabinetry, tile and various other inside elements. Bonneville Masonry also had a hand in the project, laying all the stonework on the inside and outside.

To begin, the teams constructed a central core of steel, which became a sheer structure that resembled a high-rise. The lower level and central core consist of both concrete and steel. The front of the home is arced and supports a metal roof that also arches. Underneath, glue-laminated beams came together to also provide a strong foundation for the roof and insulation to the home.

The team actually curved the roof on-site, bringing out all the raw materials and making the panels in the driveway. They then hoisted them up to the roof and installed them. Additionally, dozens of windows along the front of the home allow for panoramic views of the bay. Each window is wrapped in stone and was custom-made to fit the residence. This required every window to be field measured, verified, ordered and put in place.

The home also features lots of terraces and decks, which the teams wrapped in stone. The entryway, the sides of the house and the area above the garage feature this same stone. This way, the material wraps around the residence but doesn’t cover it completely. Designing the home in such a way makes it warm and inviting, blending nicely with the surrounding trees and sandy beach.

Building Among the Dunes

As if the home’s design wasn’t challenging enough, the dunes also presented a fair share of trials. The owners wanted a 5,000-square-foot home. However, the Critical Dune Act left very little space on the property that they could actually build upon. A team had flattened out space for a small home many years ago before the township signed the act into law. Afterward, companies could not build on or utilize the dunes outside of that small area.

Thus, the team had to provide square footage by building vertically. Adding a third story, however, brought the building’s height quite close to the maximum township limit. The team solved the problem by putting a sheet peeling right at the edge of the critical dune and backfilling it. This way, they could start higher when they measured the roof height. The township accepted this plan, and the team commenced vertical construction.

The limited site area didn’t leave much room for storing materials, either. A steep downhill grade from the house to the lake made it nearly impossible to build things on-site. The team found ways to solve this problem by constructing a stairway from the home to the lakeshore. They then built a slide that they used to transport bags of concrete down to the shore. There, they mixed the concrete and poured the foundations.

Even though the dunes presented a challenge, the teams were still able to work around the various stipulations, laws, and sandy terrain without disrupting the critical dune areas. Thanks to careful measurements and planning, no erosion occurred. Moreover, working with the owner allowed the teams to adapt plans and build a more vertical structure with a small hot tub instead of a lap pool. This way, they were able to preserve the land while still meeting the owner’s wishes.

The Height of Luxury

The curved nature of this home — which allows for panoramic views of the bay — as well as several other unique features, make this home both luxurious and beautiful to live in. One of the main features of the space is the kitchen, dining and living area on the second level, which the team positioned high enough to have commanding views of the lake. The view includes dunes on the south side and plenty of trees to the northeast.

Underneath this second level is the first, which acts as a beach house with a couple of bedrooms and baths. Here, there is space for entertainment, a guest room and various other areas. A two-car garage and emergency shelter sit beneath this main level. Above the second level are three more bedrooms, including the master bedroom and an attached master bathroom, as well as two other baths. An elevator connects all these levels.

The home is roughly 5,000 square feet, which is twice the size of the average home. Stacking obviously helped to accomplish this. Additionally, the decks and terraces make the home feel much bigger than it is. Of course, the wide, panoramic views and distance from any neighbors also add to the secluded, luxurious aura of this unique abode.

A Study in Determination

From start to finish, the entire project took 10 full years. The home was finally completed in 2017. While there are no construction teams there today, it’s a lasting testament to the determination applied to all parts of the project. From the owners who lent their input to the people who physically built this architectural wonder, the mansion took effort and dedication from everyone involved.

Moreover, preserving the land took precedence. In most cases, this isn’t something contractors concern themselves with. However, considering Michigan’s unique geological features and fragile dune ecosystems, preservation was a must. Now, occupants can appreciate the teams’ dedication to both the land and their home. As they gaze out at the dunes that support their residence, they can see the work that went into sustaining them just so they might enjoy the view from their top floor terrace.