A Temple in Brick and Stone

After five years of design and two and a half years of construction, Christ Chapel at Hillsdale College in Michigan was dedicated in October. The 70-foot tall brick and limestone façade is the focus of a newly formed quadrangle north of the historic Central Hall.

Designed by Duncan G. Stroik Architect and built by Weigand Construction, it is the first classical college chapel of its size built in over seventy years. It stands as a testament to builders around the country that masonry continues to serve as a timeless and beautiful material for campus architecture.

The entrance portico is an eight-columned “tholos,” or tempietto in Indiana limestone, with each load-bearing column weighing twelve tons. Every limestone drum and capital is pinned with stainless steel, and an anchor-plate which transfers the weight and thrust from the tension ring above is bolted to the column capital. The self-supporting brick dome crowns the tholos.

The dome is a shallow spherical cap with a free span of 32 feet and a rise of 6 feet. The dome design was conceived by Duncan G. Stroik Architect in collaboration with LKL Engineers of Toledo, Ohio, and John Ochsendorf of Ochsendorf DeJong & Block in Cambridge, Massachusetts. John researched load-bearing masonry domes at MIT and now directs the American Academy in Rome.

During the planning and construction of the dome, Weigand Construction worked closely with Stroik on shop drawings and final details. The bricks are solid instead of cored and are laid in a concentric running bond with ¼” joints instead of 3/8” joints. The solid bricks and the tighter joints strengthen the shell-action of the dome, which holds it in place.

The dome was erected with custom-engineered plywood forms built and tested off-site. An access tunnel was designed into the scaffold support system to allow deliveries and entry into the building while the brick dome was constructed overhead.

Eight ribs radiate from the center of the dome, which is an extra brick in depth. The rib bricks were special shapes with header bricks every three courses to tie the rib to the dome. The width of each rib narrows as it rises to the peak, keeping consistent ¼” mortar joints, and together the ribs hold in place a limestone rosette keystone, which is cored so that a 900-pound chandelier could be welded to the steel roof structure above.

The peak of the dome is 32 feet above the floor. The brick dome is “self-supporting” in that it relies on gravity and does not contain any steel rebar or concrete structure. A ½” thick mortar parge across the top surface of the bricks provides some evenly distributed weight and additional cohesion to the dome.

Over time, this mortar parge will help maintain the shell-action of the brick and will provide additional water protection. The shallow dome’s outward thrust is resisted by a perimeter tube steel tension ring that is anchored to the top of the limestone columns below.

The front door surrounds in the portico are carved limestone and have curved cornices and pediments that radiate from the center point of the portico. Each surface has a different radius so that they relate to the portico center, which is most noticeable when one looks at the modillions that project forward, arrayed individually from the center point. The curved pediment is a single piece 3 ½ feet tall and 9 feet wide with every recess hand-carved by artisans. All the limestone for the Chapel was supplied by Bybee Stone Company in Indiana.

The brick used for the project is Belden Brick from Canton, Ohio. Multiple brick blends and colors were reviewed in all conditions. Sunny, shade, and night, both wet and dry. Five mock-ups of different brick blends and mortars were scrutinized before a blend was selected, attempting to complement the historic brick colors at Central Hall and the more recent brick blends on Hillsdale’s campus. The final mixture for the walls is a custom variation of the Belden blend “Arcadia Velour,” and the mixture for the portico dome is a custom variation of “Nevada Velour.”

A gray mortar was selected that will match the mortar of the adjacent student union since brick arcades would connect it to the new Chapel. The gray also works well for both the interior and exterior joints between Indiana limestone pieces. The mortar selected is from Spec Mix, Type N.

The 53-foot tall perimeter walls stand within ten feet of adjacent campus buildings. In order to make construction safe in case of a high-wind event, the concrete masonry wall strength was increased. Compliance with internal bracing requirements was achieved with (1) increasing the psi of the grout to 2500 and grouting solid top to bottom, (2) increasing the quantity of steel rebar, and (3) relying upon the steel beams of the side balconies as support at the half-height of the walls.

The brick cavity wall construction utilized a variety of materials and methods. Hot-dip galvanized ladder mesh was embedded in the concrete masonry walls, and Wire-Bond Hook and Eye brick ties were installed every 24” on center horizontally and every 16” on center vertically per the Architect’s drawings. In proximity to inside and outside corners of walls, additional adjustable dovetail brick ties were anchored to the concrete masonry units.

The rusticated brick lower level around the perimeter of the Chapel is articulated with a recessed reveal band that creates horizontal shadow lines, and the rear elevation has three limestone panels with intricately designed voussoir brick arches. Belden Brick manufactured all the custom arches and special shapes for the project, with several rounds of shop drawing reviews by both Weigand Construction and Duncan G. Stroik Architect.

Due to the complexity, dry-laid mock-ups for the voussoir and other arches were performed prior to installation. After applying dampproofing to the face of the concrete, the cavity wall below flashing was grouted solid.

Expansion joints are hidden alongside the brick pilasters, which are 5-feet wide and three brick wythes deep. Some of the pilasters project 4 inches and others 8 inches from the face of the typical wall surface, and they have limestone capitals and bases with stainless steel anchors to the concrete masonry unit structure.

Traditional brick ties would not have been sufficient for multiple wythes of brick, so Weigand and Stroik decided that a combination of Z-bars, header bricks, and extra-long hook and eye ties would be used at these pilasters. As fill for the inner wythes of brick, the masons utilized common brick that varied in color but matched the material properties of the Belden Arcadia Velour.

There are no large horizontal relief angles along the 53-foot wall height, so the brick can expand naturally over time without separating from the structural backup. There are only a few steel lintels over exhaust vents. All the brick arches support the weight of the brickwork above.

It was determined at bidding that an all-inclusive weather-resistive barrier system called CavityMate Ultra Air Barrier from Dow Chemical would be beneficial for the project. Masons installed the air barrier and insulation in sequence with their brickwork instead of engaging another trade to apply a liquid air barrier.

First, extruded polystyrene foam insulation boards were adhered to the CMU, followed by GreatStuff polyurethane foam sprayed in the gaps, and then behind steel flashing and at the surface of wood blocking Liquidarmor was applied for a continuous barrier.

Mock-ups of the air barrier system were reviewed by the Architect and a representative from Dow before the work began. Using the Dow system gave the masons much-needed flexibility to shift laborers around the building perimeter during construction.

Though the face of the brick wall surface steps back and forth along the height the wall due to multi-wythe brick and thick limestone profiles, the backside of the brick and limestone is aligned so the cavity is uninterrupted and any infiltrating moisture can drain. The architect’s details called for copper and stainless-steel flashing in the cavity wall, and also a stainless-steel trough that diverts cavity moisture around window and door heads.

The use of this trough eliminates the need for rope or vent weeps at arches and lintels. Instead, rope weeps are located only at the bottom of the wall cavity spaced 24” on center maximum. Ropes were also routed behind large limestone pieces to ensure that moisture was carried forward from the cavity to the face of the weep.

Stroik specified flush-hemmed stainless-steel drip edges to eliminate the visibility of any jagged leading edges of flashing. Finally, lead-coated copper flashing is fastened to skyward-facing areas of limestone to limit the absorption of moisture and to prevent premature discoloration. 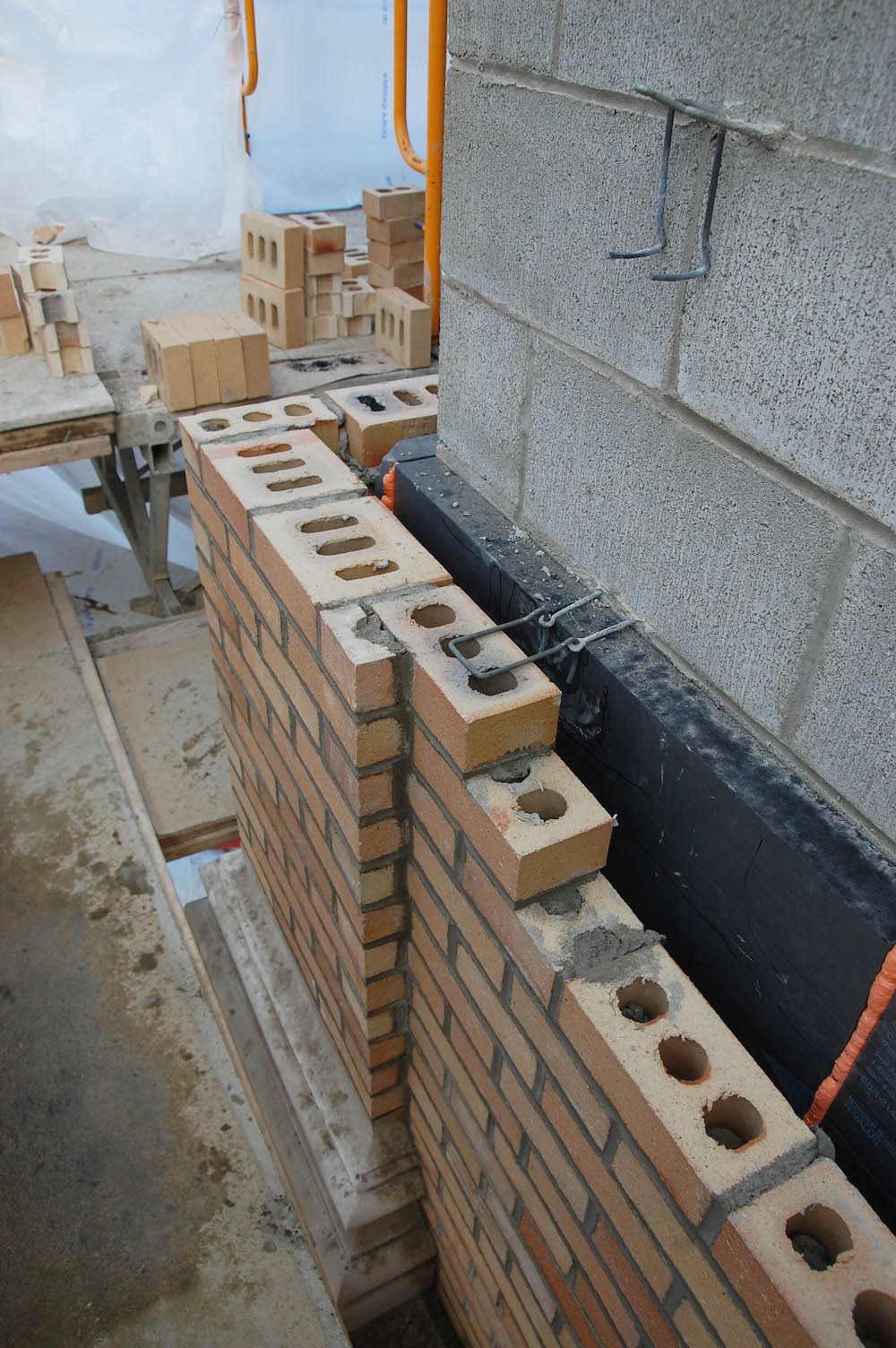 Blend of Brick and Stone

Christ Chapel showcases the architectural variety that can be achieved with brick and limestone. There are eight window arches that span ten feet, 17 arches at the front arcades that span six feet, and countless window arches and limestone door lintels. Horizontal and vertical joint locations between brick and stone were carefully located by the Architect and installed with the best brick masons at Weigand.

The exterior limestone is “variegated,” which consists of both gray and buff colors that will weather and even out over time. The interior limestone columns are “rustic buff,” which are a more consistent color and have visible fossils in places. All the limestone columns are load-bearing and have ¼” joints typical. The most innovative use of limestone at the Chapel may be that the interior columns serve as a load-bearing structure for the side balconies and the snow load of the roof.

The steel beam rests in a pocket cut into the middle limestone drum, and an anchor plate at the top of the capital supports the steel columns and beams of the roof structure. The columns are 28 feet tall, weigh 17 tons, and proudly define the nave and chancel of the Chapel.

Duncan G. Stroik Architect draws almost all construction drawings by hand. The documents include half-scale and full-scale profile and flashing details, and elevations of custom-cut brick arches and rustication. The level of detail by the architect helped to facilitate shop drawing reviews and limestone shop tickets for the project.

Multiple trips were made by Stroik and Weigand to Bybee Stone Company in southern Indiana to review the limestone fabrication progress. Due to the vision, hard work, and collaboration of this team of professionals and the client, Christ Chapel will stand for centuries as a beacon of faith at the center of Hillsdale College.